When it comes to movement…
LESS is more

A unique characteristic of our mechanism is that it can be designed to create the perfect kinematic for each application. For example, we can create a completely smooth, fully sinusoidal* movement with counter-balanced pistons for a compressor, making it virtually silent and more efficient.

Adversely, for an Internal Combustion Engine we can introduce a delay at the Top-Dead-Center of the piston, which helps combustion and create more power and efficiency. In essence, we can finally create an isochoric/isovolumetric combustion process, and replicate the theoretical Otto cycle. Or we can use a second order polynomial** equation to reduce the maximum acceleration of the piston.

We are no longer constrained by the length of the rod and the limitations of the current designs. In the graphs below, we will compare various kinematic equations we can use for the piston movement and their effects. The LESS designs are shown with solid lines, and the crankshaft designs are shown with dashed ones.

As for the LESS kinematics, we’re showing three versions that have interesting and unique characteristics. Looking at the position of the piston in the y axis as a function of rotation in x degrees, here are the cases: 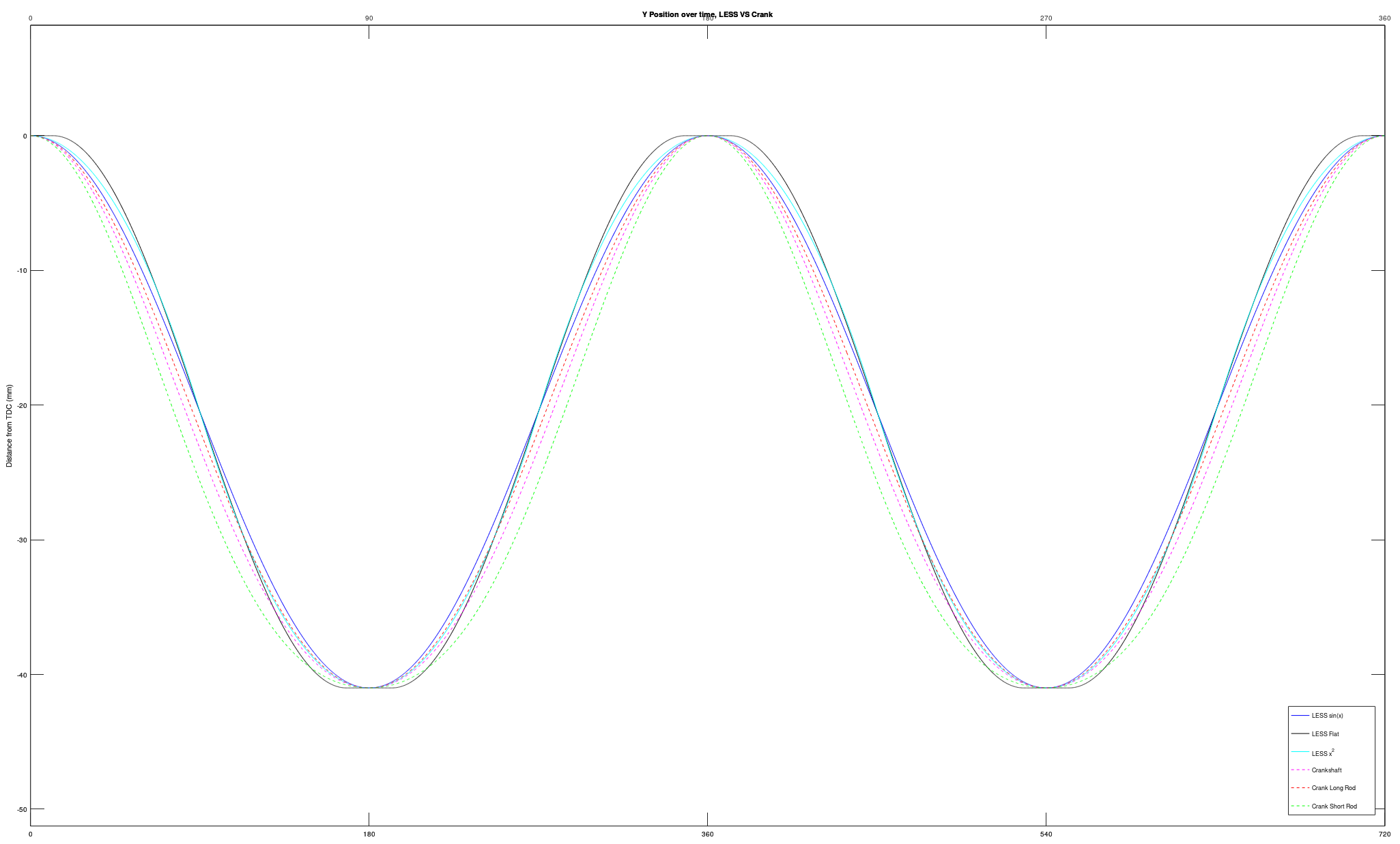 Note that the 1st LESS case is the only one with real sinusoidal movement that doesn’t create high order harmonics that need to be balanced. It also has a flatter movement on the TDC than the crankshaft designs, which is an advantage in ICEs. In general, LESS allows us to correct one of the issues of the crankshaft design, which is a flatter curve near BDC and a sharper curve near the TDC, which is the opposite of what we want.

In fact, this is exagerated in the 2nd, LESS Flat design. Notice how faster this design reaches the TDB and BDC. Even in the 3rd case, where y=x², our mechanism still results in better movement compared to the crank designs. This will be even clearer in the Volume/degrees graph.

Essentially, in the case of an ICE the LESS mechanism burns the same amount of fuel and produces the same power output at half the rpm of a crankshaft engine. It also produces twice the torque, which means a smaller level of gear reduction is required. Similarly, in the case of pumps or compressors, the device works at half the rpm and twice the torque.

To further understand the movement of the LESS mechanism, here’s a comparison of the velocity of each version. 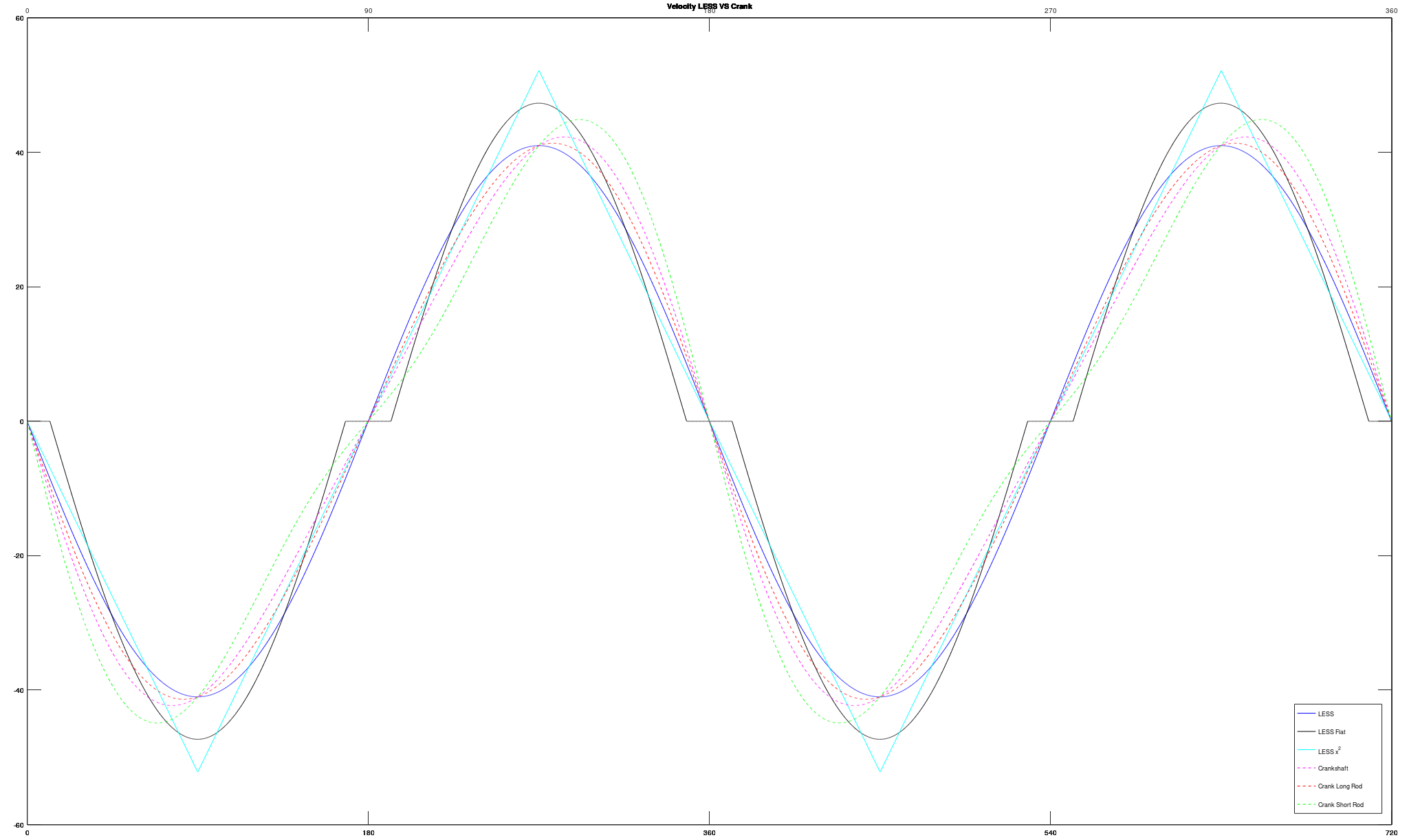 First, notice the sinusoidal nature of velocity with regards to degrees of rotation of the 1st LESS design. Since velocity is the first derivative of position, the velocity of our sine movement is cosine.

On top of being a harmonic sinusoidal wave, the 1st design also has the best min/max values, as expected. Compared to the standard crankshaft, we have better movement, volume, and velocity.

Furthemore, notice that in the 2nd LESS design, where we have added a flat section (delay) in the TDC and BCD, the velocity drops to zero, as expected. And in the case of the 3rd LESS design, velocity is a linear function, as expected. Of course, this results in a slightly sharp reversal of velocity mid-stroke, and a higher min/max value, but that can be easily amended with small changes in that section if necessary.

Now let’s compare the acceleration between the different designs. Notice that: 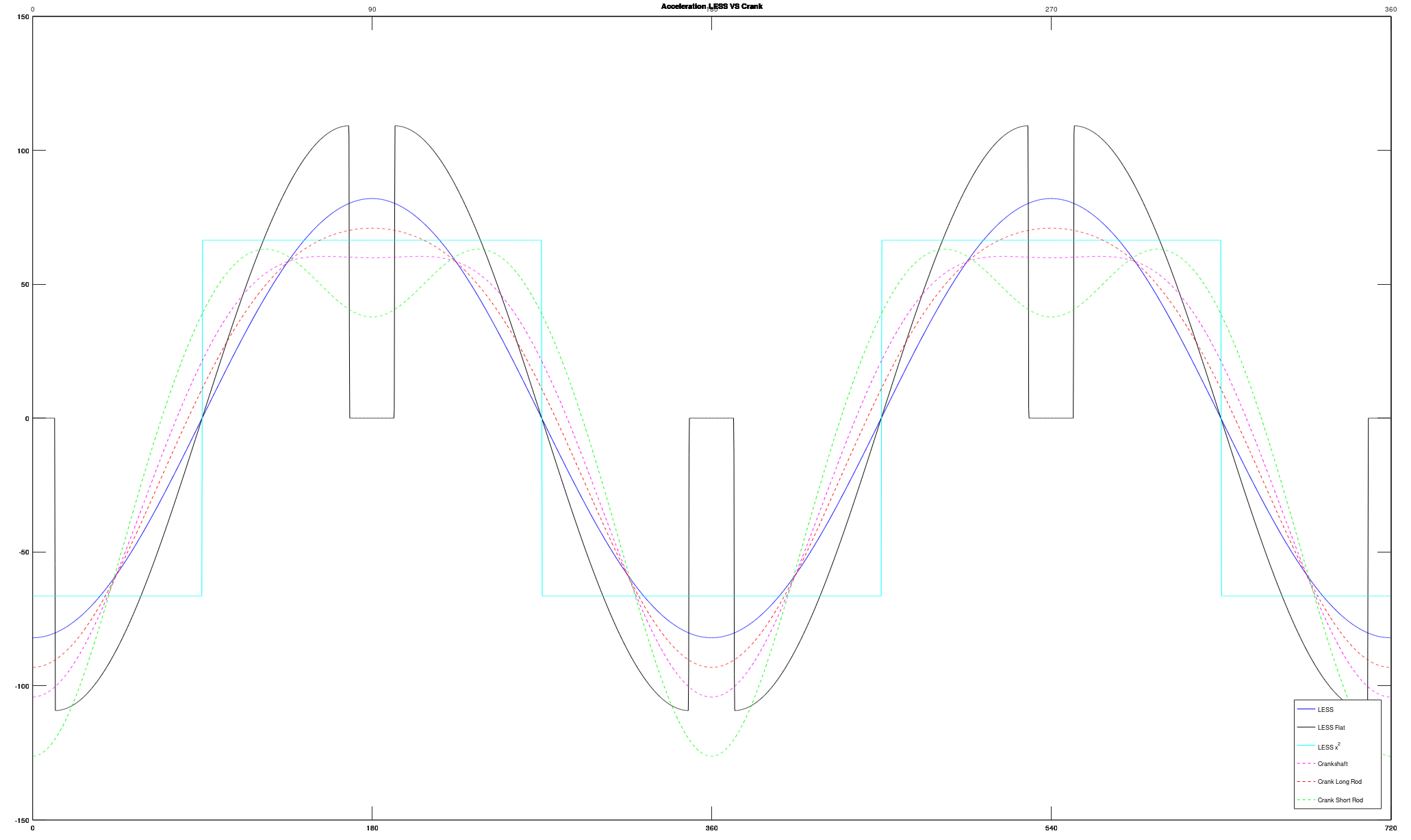 Here’s a comparison of the working chamber volume/rotation. 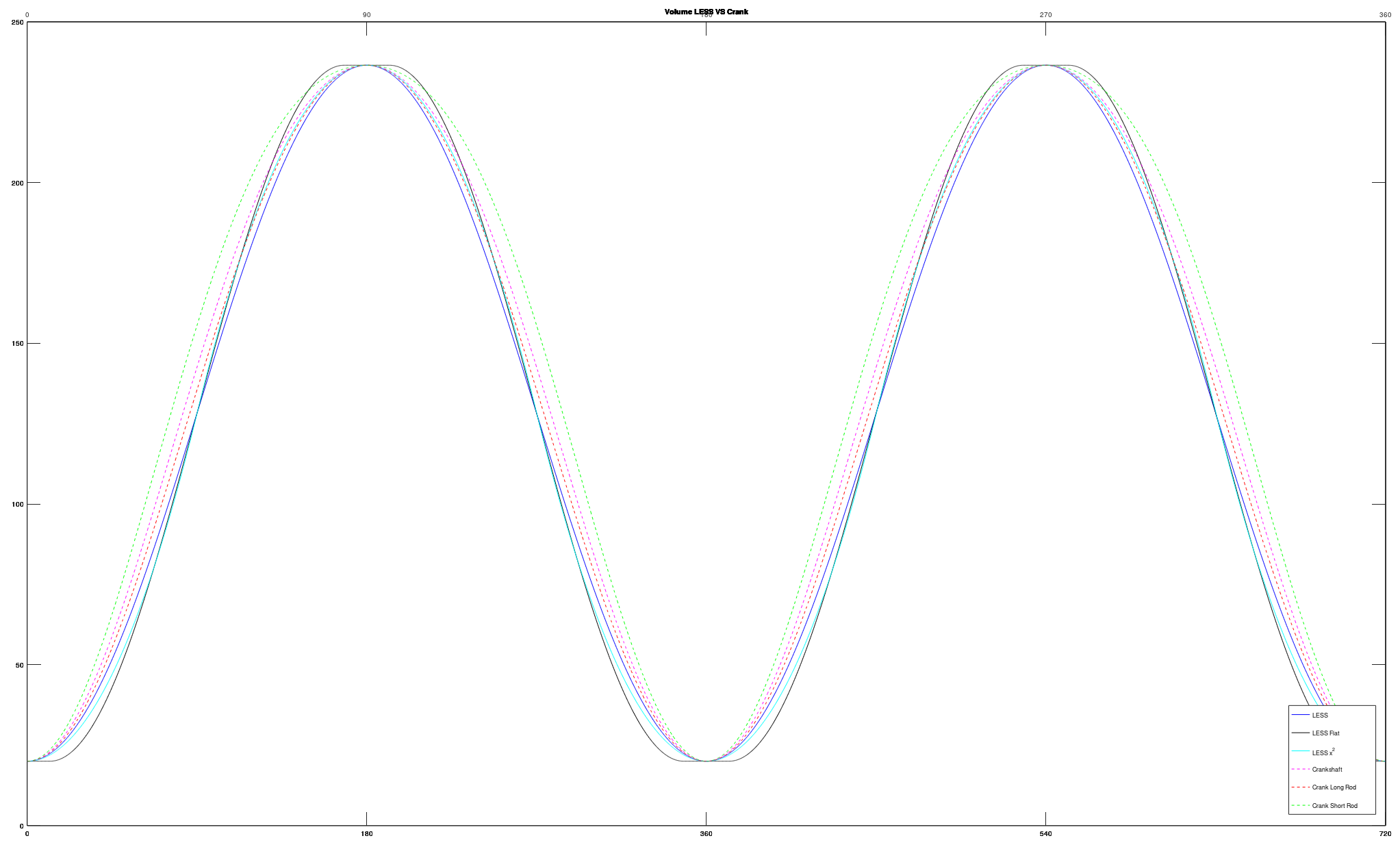 As we can see, and as we briefly mentioned before, there are significant changes we can make with regards to volume/degrees or volume/time. For example, notice the flatter volume around TDC on all of the LESS designs, compared to the Crankshaft designs. This results in significantly improved combustion in ICEs at the TDC.

In fact, in the 2nd design, the introduction of the flat section creates an isochoric combustion around TDC as well as better exhaust gas removal around BDC, while at the same time allowing for maximum mechanical conversion of the combustion pressure into kinetic energy.