Not reinventing the wheel, but improving it

Piston pumps & engines are not perfect, but they are a design that works great. Which is why we are not reinventing the wheel with our design. We are doing the exact same job, while building on top of the existing solutions and improving them.

In essence LESS is merely replacing the crankshaft mechanism with a more robust, lighter and smaller mechanism. And while we’re at it, we can use similar kinematics as existing solutions, or any number of different kinematic functions, uniquely fitted for the particular application.

The devil you know

Internal Combustion Engines in particular have a lot of disadvantages and flaws, but they are still wonders of engineering, and they get the job done. They have had countless man-hours invested in them for more than 150 years, and those investments have resulted in a host of improvements.

Which is why with LESS, all of the proven technologies and solutions are kept in place, and we merely improve a key component that allows us to do the same job, only better. With a lighter and smaller mechanism.

We simply connect our LESS mechanism to the piston and the axel, replacing the crankshaft-rod mechanism. Any mechanical force on the piston (e.g., resulting from combustion) is transmitted through the rotor to the axel as torque.

Since it doesn’t affect the thermodynamic cycles of traditional engines, the LESS mechanism is applicable to all kinds of ICEs (Diesel, Gasoline, LPGs etc).

Because our mechanism makes 2 (or more) reciprocations per full rotation, it completes one full combustion cycle in 360 degrees.

As a result of this, we produce the same work as traditional designs at half the RPMs but twice the torque, as you can see on the right, cutting the amount of gear reduction required by half. 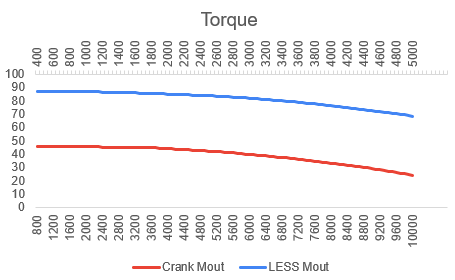 Additionally, because it can follow a large variety of kinematic functions, it can do the same job as the crankshaft, but better. For example, it can follow a short rod’s kinematic without its inherent disadvantages such as high friction between the cylinder walls and the piston.

In fact, it creates no radial forces on the piston. This eliminates the friction & wear between the cylinder and the piston, the rocking movement and the clanking noise, and creates better sealing. It even has fewer moving parts and a smaller number of sliding surfaces, which further reduces mechanical wear and tear and maintenance costs.

Last but not least, because our mechanism is fully symetrical along the main axis, it’s possible to completely balance all of the vibrations and high order harmonics of one cylinder by configuring cylinders in various ways, as seen on the left. On the right, you can see two cylinders connected directly opposing each other, similar to the Boxer style engines. Contrary the Boxer engines, the two cylinders are coaxial and completely balanced.

As we already mentioned, a LESS engine uses the same, well-established thermodynamic cycles. Even better, we can improve them! With LESS, the combustion can be designed specifically as wanted, resulting in increased performance and efficiency.

For example, we can introduce a delay in the Top and Bottom Dead Centers of the piston (via the undulated surfaces’ design, see Kinematics section for more info), and fix a shortcoming of the crankshaft mechanism resulting in high energy losses and low efficiency ratio due to the imperfect combustion. The delay in the Top Dead Center enables a near-perfect isochoric combustion and better mechanical conversion of the pressure in the combustion chamber into work.

Compared to a traditional engine, it has a significant reduction in volume , due to:

This results in a smaller, lighter, and cheaper engine, for a given amount of power and performance.

One obvious disadvantage of the LESS design is that has had nowhere near the validation and testing of the crankshaft mechanism, which has been around, tested, and improved upon for ages. However, this is where our efforts are currently focused, using all the modern engineering tools available to test, improve, and validate our design.

Another important factor we should note is that by design, our mechanism can be used in Square to Oversquare Bore/Stroke ratios, with a slight preference to Oversquare ratio. Therefore, some applications that require an Undersquare cylinder design will not be able to use it. However, because of its unique design, it avoids some inherent disadvantages of Square and Oversquare designs, making them applicable in more cases.

It remains to be proven & validated with our design, but improved combustion and the increased control over it, allows us to increase the compression ratio without resulting into catastrophic knock and detonation. This further increases the power and efficiency of the engine. And because of the simplified design and geometric characteristics of the LESS mechanism, it’s even relatively easy to build a variable compression ratio engine.

It is important to note that LESS can easily replace a 2-stroke ICE. 2-stroke ICEs are already famous for their weight & cost advantages compared to 4-stroke ICEs. However, they are highly polluting, as they consume and burn oil. With LESS, a 2-stroke ICE can be replaced with a 4-stroke of the same size, without the need to burn oil.

Furthermore, LESS can be used as a clean 2-stroke ICE, using a Turbocharger/Supercharger or secondary chamber, so that the combustion mixture doesn’t pass through the crankshaft. Therefore, LESS eliminates the need for oil in the fuel mix and the 2-stroke LESS engine operates free of polutants. Taking advantage of the delay in the Top and Bottom Dead Centers, we can completely extract the exhaust fumes when we introduce air, give more time for the combustion to occur, and create an engine with a much better efficiency than existing 2-stroke ICEs.

As is the case with ICEs, using the LESS mechanism in a Pump or a Compressor can result in significantly reduced size.

LESS is a much simpler mechanism with fewer moving components compared to the crankshaft, and in the case of pumps & compressors it has only one sliding surface where friction is generated. This increases efficiency and reduces wear and maintenance costs.

Using a sinusoidal kinematic function, we reduce the vibrations and noise of the devices. Additionally, because it can be balanced (similar to the LESS ICE), it can completely eliminate vibrations, and the noise and power losses associated with them.

Furthermore, because of its smaller size, noise can further be eliminated by enlarging the mechanism and the chamber and reducing RPMs, leading to a similarly-sized device as with a crankshaft, but with significantly reduced noise.